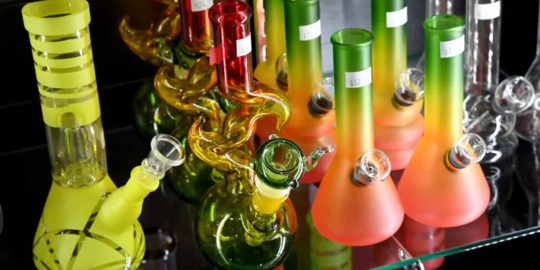 For some people, ‘paraphernalia’ is a term that comes with as much stigma as ‘marijuana’ itself. For others, it implies a charge that was prevalent in the US even a couple of years back. But in reality, paraphernalia is nothing but a term that suggests the ‘equipment need for certain activities.’ So just like a baseball glove can be a baseball paraphernalia, for marijuana, any equipment you use for consuming cannabis can be labeled as ‘paraphernalia’.

But with the extent of cannabis legalization laws in the country, particularly over the last five years, paraphernalia laws have loosened in several parts. So, what was once a product that could get you into a jail, has now evolved to be a booming business as legalization has seamlessly merged with the technological advancements, creating a massive online marketplace for cannabis and marijuana paraphernalia.

Owing to the legalization, there has been some major innovations in the marijuana paraphernalia market. According to Dave, a representative of Smoke Cartel, there has been an influx of new products with innovative designs over the last couple of years. Since glass companies are always rolling out new designs while shelving the old ones every year, for Dave, this is nothing less than the fashion industry. At this point, almost every company is looking to come up with the coolest pipe, bong or dab rig. Owing to this innovation, plenty of new products are being introduced to the market.

Attorney General John Ashcroft who fueled the DEA operation ‘Pipe Dreams’ back in 2003 has an opinion that’s almost similar to Dave’s narrative. According to this, the drug paraphernalia business is now accessible to one and all with widespread internet access. And since kids and teenagers are the fastest growing internet users, they are the ones who are primarily fueling the business. So quite simply, the drug paraphernalia industry has boomed, prospered and made its way into the millions of American families. While he emphasized that they would take relevant steps to weed this issue out, can it really be possible?

Many states in the US have decriminalized marijuana. Some of them even legalize it for medical use. But even then, drug paraphernalia is illegal to be in your possession if you live in America. However, this legal contention goes hand-in-hand with the widespread growth of local headshops in the US. Yes, over the last couple of years, these shops have grown faster than the UPS Stores, so it doesn’t seem like that cannabis laws are ‘actually’ enforced. While legal enforcement is still in place, its level of strictness is really in question.

Some people think that these regressive laws will completely over-turned at some point, in a bid to worth with the growing marijuana market. Perhaps this is the reason why overseas manufacturers have stepped in the picture and are busy crafting their very own paraphernalia marketplace. Like we already told you, most of these manufacturers operate online. So, they end up shipping products to America, weaseling their way out of laws that aren’t directly applicable to them.

As more efforts are being taken to implement legalization, more domestic manufacturers are coming up. For some, this is inadvertently a boon for the American economy.

According to Simon Bannik, the founder and operator of Grasscity, a leading Amsterdam based headshop, this alone can be deemed as the ‘Green Rush’. He further added that by 2020, the cannabis paraphernalia industry is said to grow by more than $40 billion dollars. While this surely is great news for dealers, it’ll also make way for more competition. Right now, more than thousands of brands are competing to the best headshop in their localities. Banniks says he is extremely lucky as Grasscity already comes with a history of 16 years. Since they’ve been in business for long, more people tend to trust them.

Grasscity is indeed huge, and their forums alone push more than 40 million impressions every month. For the other retailers who are just coming up, the race will be to take the second place. But despite this staggering popularity, Bannik believes that there’s space for everyone to compete at his level since there’s lot of business to do.

So, while he does intend to be the #1 Cannabis brand in the nation, he is also willing to work with his US based competitors in a bid to promote legalization and a happy and healthy industry for all. Since the paraphernalia industry is big to accommodate everyone, more businesses can collectively work. This in turn, will give everyone an opportunity to grow. Since prohibition is likely to end over the next couple of years, the cannabis paraphernalia industry is sure to create a new era supporting growth and economic development in America.

And herein lies the big question. As legalization is gradually making its way, will the government actually allow things to work in the marijuana industry’s favor?

Pharmaceutical companies, alcohol manufacturing units, private prisons and even some police unions are likely to lose their profits (temporarily) if marijuana is widely legalized across the nation. But these losses and lack of funding will only be temporary, as industry-insiders are confident that these authorities will make things work out in their own way.

Around 20 states have rolled out bills for legalizing marijuana in some way or another. So, it’s only a matter of few months (or years) when possessing cannabis paraphernalia will no longer stand to be illegal. There’ll also be benefits for the states with more jobs, higher tax revenues and a solid tool to fight the federal government. At the end of the day, money will always win, and since marijuana is a billion-dollar industry, the federal government will soon realize it. So, it is baseless to waste the resources in fighting an issue which will soon be legalized over the coming years.