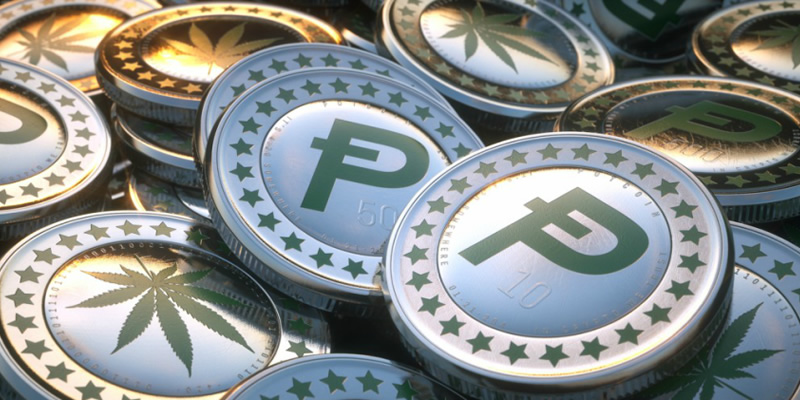 It’s amazing to see how the cannabis and the cryptocurrency markets have merged to take the cannabis industry to a new level. The collaboration of these two emerging markets has surely paved the way for the development of an array of tokens known as potcoins.

You see, cannabis is classified as a schedule I drug. Due to this reason, most banks and financial institutions are shying away from funding cannabis dispensaries and other businesses under this bracket due to strict federal laws.

Luckily, the cannabis industry is not willing to back-off despite its numerous obstacles. With the emergence of the digital currency, cannabis merchants have opted to merge their marijuana businesses with the crypto world to make the potcoin the medium of payment in this sector. Having said that, let’s now highlight 5 of the leading cryptocurrencies that have made the cannabis industry more organized, secured and more decentralized.

Potcoin is the first cannabis cryptocurrency that was released way back in January 21st 2014 after a series of trials and errors. Designed by three creators Hasoshi, Smokemon and Mr. Jones, the Potcoin crypto was launched as a way of taking advantage of the legalization of cannabis in Colorado.

Despite the attempt, this currency failed to break through recording a low market cap of just $81,547. However, on June 12th 2017, an NBA star Dennis Rodman was captured wearing a potcoin.com t-shirt in North Korea something which turned out to be a turnaround point for this digital coin. Soon after Rodman’s trip, it was alleged that the Potcoin gained by 76%.

Today, this coin has a market cap of $8.01 million with only 220.6 million coins being in circulation. Having switched to a more secure Proof-of-Stake network, Potcoin has guaranteed cannabis investors 5% annual returns. Today, one Potcoin is retailing at $0.036 with an estimated transaction speed of 40 seconds.

On the hot heels of the Potcoin lies yet another coin which is the CannabisCoin crypto. Also launched in 2014, this coin was developed with a similar goal of making cannabis transactions much easier. Although this coin didn’t perform so well as compared to Potcoin, it has managed to divert cryptocurrency into the marijuana market by allowing an exchange at the rate of 1 CANN to 1 gram of cannabis.

From one potcoin to another, the DopeCoin is another interesting cryptocurrency that has joined in the race to make cannabis transactions more simplified. Founded by Adam Howell “Dopey” in 2014, DopeCoin has featured as one of the major trading coins in the cannabis sector with a limited supply of 200 million coins and about 116 million already in circulation.

With a market cap of $1.30 million and a value of $0.011 per coin (as of September 2018), DopeCoin has taken the heavy load off cannabis merchants as you don’t have to worry about carrying large amounts of money just to buy cannabis flowers or pay your employees. In addition to that, cannabis merchants are given a platform to save their money in the banks using crypto rather than cash.

This rare approach has given the HempCoin a different flavor as it’s more centered in facilitating transactions between marijuana farmers and local dispensaries/local medical companies as well. In addition to that, cannabis farmers can use this coin to purchase farm tools and other gear to make farming more advanced and productive.

As of September 2018, the HempCoin had a price range of $0.02589 and a market cap of over $6.25 million. Having announced their partnership with DASH, it’s likely that the HempCoin will appreciate in value making it the leading coin in the cannabis industry. As more states join the league of legalizing cannabis for medicinal and recreation use, it’s projected that the HempCoin will appreciate in value and reach $11.44 by 2022. Currently, HempCoin has about 240 million coins that are in circulation.

Another coin we can’t afford to miss out in this list is the CannaCoin. Developed back in 2014, CannaCoin runs on a similar technology as the Bitcoin (peer-to-peer technology and a de-centralized blockchain platform). Just like other coins, this coin is also used by marijuana farmers, dispensaries, patients and customers as a medium of payment for goods and services.

Although this coin is worth $0.02315 with a market cap of just $108,838 and about 4.7 million coins in circulation (as of 11th Sep 2018), experts are suggesting that the CannaCoin might appreciate in value as soon as marijuana legalization in California takes effect. Why? According to statistics, most dispensaries in California are familiar with this coin. Due to this reason, it’s obvious that the CannaCoin will for the first time have the perfect opportunity of rising to the top.

Cryptocurrency is an emerging trend and is the future of the currency market, in fact, it’s here to stay. On the other hand, the cannabis industry is the next big thing in the investment sector and is projected to grow to billions of dollars in coming years.

Now, if these two booming industries are merged together, the results will be nothing short of a game-changing experience especially for cannabis investors and farmers alike.

Having come at a desperate time in the marijuana sector, crypto cannabis coins have received a warm welcome from most pot investors. As more states continue to debate on the issue of legalizing cannabis for medicinal and recreational use, the marijuana industry is set to grow even further considering that investors will no longer have to rely on banks just to make payments.

Now that we’ve reviewed 5 of the best crypto cannabis coins for 2018, I believe you now have an idea of which coins you need to invest on to avoid any future disappointments.