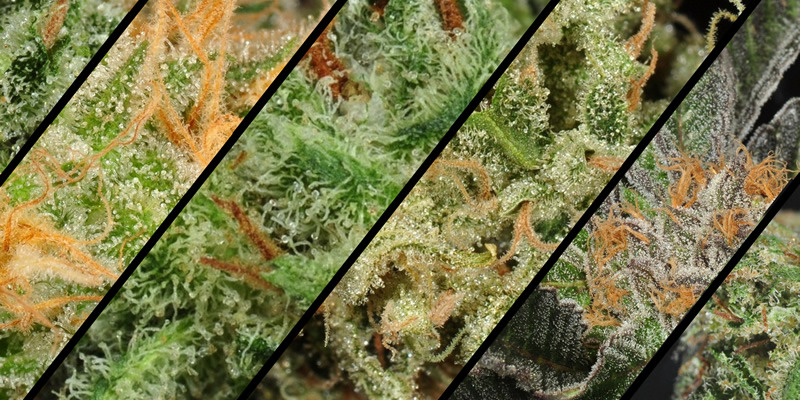 Thanks to marijuana legalization, both for medicinal and recreational use, the popularity of using cannabis is sky-high. Dispensaries have their work cut out of them and there is a variety of strains to choose from.

In order to keep the customers happy, many dispensaries offer a plethora of interesting cannabis strains for their customers. However, there are still some that people turn towards the most.

This is mainly due to their potency, the type of high, flavor and effects.

Let’s see which are the most popular ones.

Green Crack, although a bit controversial due to its name was given by the rapper Snoop Dog, is a very popular daytime Sativa strain. Green Crack has dark buds and a distinctive smell when open. You will be immersed in the tropical fragrance of mango and pineapples mixed with some tangy sour citrus.

The Sativa-inspired effects provide a cerebral high to add the effect of outgoingness and increase social tendencies. Due to it having Skunk #1 genetics, it does have some Indica effects. But they are not as pronounced and only provide slight physical relaxation.

Blue Dream strain is perfect cannabis for beginners. In fact, it is the most selling strain in some major dispensaries around the US. It is a cross between the Indica Blueberry and the Sativa Haze.

It is a perfectly balanced Indica and Sativa blend. It usually provides a really balanced high and gives you what you would expect from a certain type of marijuana. But there are some phenotypes that are leaning towards the Indica side more. These come with some more physical sedative effects opposed to the others.

Blue Dream cannabis strain has the fragrance of blubbery, sweetness and berry. There is some purple grape and some cheese mixed in there somewhere as well. The buds are pale, almost pastel green with dark forest green leaves.

Girls Scout Cookies is a strain that is liked by both beginners and experienced users. It is a blend between the Durban Poison and OG Kush and also provides some really good-spirited effects. Both of the parent strains are really good and popular. So the idea of bringing them together to create the Girl Scout Cookies was masterful.

Girl Scout Cookies have citrus and earthy wood profile. Some notice a dash of mint somewhere in there. Most phenotypes have a slight Indica dominance. It generally puts you in a mellow and happy state.

Skywalker OG is known in the cannabis world as a lazy, hazy and a very relaxing strain. It was created by mixing the Skywalker and OG Kush strain to create a strain that has superior indica effects.

The idea was to mix the numbing effects that the Skywalker strain has with mellow and relaxing effects of the OG Kush. But it is still best to use it during days when you don’t have any responsibilities. If you are looking for a good night’s rest, Skywalker OG could lead to some drowsiness and will help you get to sleep faster.

It is pungent and has some piney earthiness to it, making it immensely popular in California.

The Strawberry Cough cannabis strain is the youngest one on the list. It has recently gotten attention from the users even though its genetics are still mysterious. But it is definitely a Sativa hybrid. You might be able to guess the scent from the name as it has hints of sweet and overripe berry flavor.

Due to its strong THC potency, its popularity is the greatest in LA. Users describe it as having uplifting effects without anxious feelings. Making the Strawberry Cough a perfect daytime smoke.