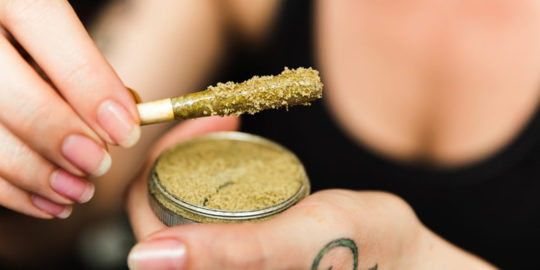 Have you ever noticed the powdery substance left as residue in your grinder or container after processing marijuana? The stuff has its name, and its kief. It can be attributed to as marijuana pollen that originates from small crystals on a cannabis bud appearing on a plant when it reaches maturity. As translated from Arabic, kief also means ‘pleasure’ or ‘intoxication’.

In terms of effect, kief is the strongest part of a marijuana plant, which contains high levels of psychoactive substances, THC included. Kief is widely known for its potency and can be used in a variety of ways when vaporized, pressurized into cakes of hashish or smoked. Color is a good indicator to the quality of the substance: green kief shows there is a lot of plant matter in it, whereas light powder is pure and more potent.

How to collect kief?

A herb grinder is normally used to break up plants and leaves and roll them into a joint. Divided into several sections, grinders also accumulate kief in the bottom compartment. The amount of kief collected there can be increased by shaking the grinder while preparing marijuana. Alternatively, one can use stainless steel mesh screens to rub leaves against them and collect the desired substance in a tray below, also known as a kief catcher. It is less effective, but also possible, to shake the growing plant and collect kief by holding a container under the leaves. Besides, one can use a sifter box and a coin to shake and sift cannabis pollen or use dry ice to extract kief.

What is clearly not recommended is to break marijuana with your hands because kief will stick to the hands due to finger oil, and less of it will be obtained as a result.

Cannabis smokers will definitely smoke it in a joint or from a special bowl, but there are a few other ways to consume kief.

Kief can be used to make hash when pressed into little bricks or plates that are then dried and baked. Being processed in such a way with the help of pollen press, it often changes its composition, taste, and consistency.

Kief is often added to THC infusions that are later used while baking cookies or any other food. Cannabis infused end-products (as butter or oil, for instance) are a popular way of using kief. They can be obtained by adding some marijuana powder in a completely melted portion of butter and stirring it well. Afterwards, you need to pour the kief butter in a container, cover it with a lid and cool it in the fridge until the butter hardens.

Cannabis pollen can also be added to a morning cup of coffee. This hot drink activates the effect of cannabinoids that is felt about 15-30 minutes after consumption and lasts for a long time.  Similarly to coffee, you can brew kief in a cup of hot tea. A pinch of this ingredient will make the drink really powerful.

Except the methods of using kief mentioned above, it can also be turned into an e-cig juice that fills the cartridge of an electric vaporizer.

Sifter box is a tool made for catching kief. It is also known as kief box, pollen box, pollen sifter, kief tumbler and all that. Their design is pretty simple, most types have two chambers. Starting from the top is where the whole bud gets placed and on the bottom lies a mesh screen used to detach the kief from your bud and then the kief obviously ends up at the bottom of the box.

The major difference when compared to a grinder is that instead of grinding, all you have to do is shake the box in order for the weed trichromes to get filtered down into the bottom layer. After you’ve done your fair amount of shaking, simply detach or open the bottom and gather all of your kief. This can easily be done by using a pollen scraper or a small brush, if these aren’t available to you, then you can simply dump it out. After you are done collecting the valuable powder, remove your bud from the top chamber and shove it in a grinder.

Why do you need a kief box?

There are many benefits of using a kief box. Perhaps the most obvious one is getting less diluted, more powerful and consistent product made up of almost 100% trichomes. You can make hash from it using the kief press. However, choosing to go with “the box” isn’t always the best solution for everybody, there are downsides for them as well, especially when compared to grinders.

Kief tumblers tend to be pretty large, so in order to get some good use out of them you would need to be using more than just a few grams on a regular basis. Not only that, but kief boxes tend to be quite expensive and you can only use them for one purpose. With a grinder at least you get to grind your bud as well.

How to choose kief box?

If you like the benefits of kief boxes and want to invest into one, then what should you be looking for when you’re at the shop? Well, the first thing you should be looking for is a quality build. If your sifter box really doesn’t look or feel like it’s of a high quality, then stay away from it, because it won’t be good at collecting kief and will just be a waste of money.

An important thing that most people don’t really consider is to watch out for the size of their mesh filter. Pollen boxes come with different mesh sizes. Both small and large meshes have their pros and cons. Large meshes allow for more kief to be collected, but the quality of material collected isn’t going to be as pure. Smaller meshes maintain a high quality level, but at the cost of missing a small amount of kief. Smaller meshes are for the true perfectionists that have plenty of buds to spare.

Probably the most important thing to keep in mind is that whether a certain kief box is right for you depends on what amount of weed you plan on using with it. However, if you are a true fan of kief, then you’ve probably already ordered it.

Weed smokers need a pollen press in their arsenal. It is even more essential for people who love to grind or blend their herbs. This part of the article will highlight the features of a pollen presses as well as why you need to have one.

A pollen press is a tiny device that is used for making compressed pollen cakes. It is made from high-grade material and allows you to make pollen pellets with ease. This device has a T-handle, an insert, and two end caps. The insert plays the role of a key because it doesn’t allow the herb to get stuck to the press during compression.

The pollen press is used to press trichomes, which are gotten from the female marijuana plant. Before the trichomes are pressed, they are known as kief. They are tiny hairy appendages in plants and have various functions. However, kief in cannabis is filled with THC, and it gives the buds a frosty appearance. The compressed kief can be consumed like cannabis buds: cooked, smoked in a bong, pipe or joint, or hot knifed. It also offers the same high quality.

Why do you need a pollen press for your kief?

A pollen press can help you to make hash out of kief. It is ideal if you plan to store the kief for an extended period (two months or less). It could also protect it from being blown away by the wind. Below are other benefits of using a pollen press for kief:

Why not? You do not need a field of cannabis plant to make good hash. For casual smokers, it is easy to get a good yield with a little effort, and you can still smoke marijuana as usual.

If you haven’t gotten a pollen press, you need to add it to your shopping list. It will help you travel with ease having the hash the size of a small pellet. It is also perfect for blending different strains easily and storing in the freezer for future use.