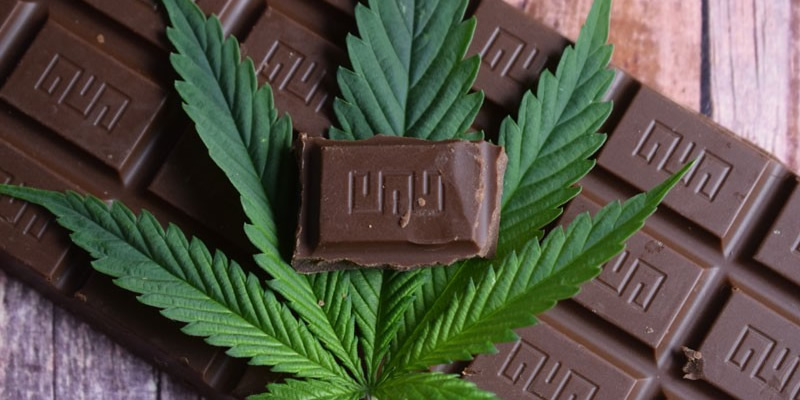 Chocolate and Marijuana have a lot in common. In ancient times, chocolate too was seen as a mystical substance. A substance that granted wisdom and could get you in touch with the gods. The first recipes of chocolate were served as a bitter drink made out of cacao. The Aztecs believed the seeds of cacao were a gift from Quetzalcoatl, the god of wisdom. Which was one of the reasons why cacao seeds were valuable enough to be used as currency.

All that is to say that there is something fitting about making edibles out of chocolate. You are taking the best of several traditions and mixing them together. But there is more to this combination than just history and poetry. Chocolate is also a known anti-depressant and a mood regulator. Its properties aid the release of feel-good chemicals in the brain, and when consumed in moderation, eating chocolate also comes with a wide range of health benefits. Making the delicious combination of cannabis and chocolate is also quite a bit healthy.

To top it all off, chocolate edibles are also very easy to make. Let us show you how you can make your own.

The ingredients for this recipe are pretty simple.

The choice of cannabis strain to use in this recipe is at your discretion. Not only that, but you can also replace the herb with other cannabis products, such as oil, butter, tinctures, etc. This recipe will focus on the raw herb because it’s what you’re more likely to have at hand.

About the Other Items

The rest of the ingredients are straightforward. Choose the type and amount of dark chocolate you wish. You will need a glass bowl that is larger than the saucepan, for reasons that will become clear in a second. Ice cube trays can serve as makeshift chocolate molds in a pinch. Finally, the herb grinder can be replaced by mortar and pestle.

First, you will need to decarboxylate your weed. Raw cannabis is fit for consumption and has positive medical properties, but it lacks potency. There is little to no active THC in raw cannabis plants. When smoking it, the burning process turns latent components in the cannabis into THC and other cannabinoids.

Decarboxylation has the same effect, leaving you with dried up weed that will have potency when ingested. All you need to do achieve all this is to spread your weed on a baking tray and put it in a preheated oven at 115ºC. Keep it there for about 30 to 45 minutes. You’re looking for the point where the cannabis starts turning brown. Mind the temperature, as the herb tends to burn at 120ºC, and burning it is not useful here.

It is very important that the glass bowl is bigger than the saucepan, so it will contain the vapor when placed on top of the saucepan, preventing water from contaminating the chocolate. Water and chocolate don’t mix; moisture will make the chocolate seize up, creating big lumps of chocolate that can’t be poured into a mold. It’ll also make it harder to stir the weed into it later.

Speaking of stirring, once the chocolate starts melting you can begin to stir it. Look to the point where the chocolate is all liquid and runny, that’s when you add the weed.

Going back to the weed, once you have it decarboxylated, the next step is grinding the amount you want to use into a fine dust. The finer the herb, the more the taste of the weed will mix with that of the chocolate. An herb grinder is ideal; using mortar also works, but it will take extra patience to grind the weed into fine dust.

Next, add the ground up weed to the melted chocolate. Proceed to stir the mixture very well while still applying heat to the saucepan. Finally, when the consistency smooth and the weed is well spread, you can pour the chocolate into your tray of choice. Then let it cool in the fridge for a few hours.

That’s it! You now have your very own chocolate edibles. Once done, store it in a cool and dry place, and the chocolate will remain stable for over ten weeks. Ready to be consumed or sold at your leisure. If you were excited by this guide, check out CannaConnection for more Marijuana content.